Simulated Moving Bed chromatography(SMB) is a continuous countercurrent chromatography that is highly efficient in separation of binary mixtures.

The principle concept of Simulated Moving Bed (SMB) process is derived from a theoretical concept - True Moving Bed (TMB). In TMB process, multiple columns are connected in a closed circuit to create a loop of adsorbent bed. The eluent is then added to this closed circuit and flow in one direction while the adsorbent bed itself is moving in the opposite direction of the fluid flow to create a countercurrent flow.

If the feed with multiple components enters the column at this moment, the component with stronger retention will be carried by the moving adsorbent while the weaker retention component will get washed away by the eluent. Because of the countercurrent flow, the entire separation process takes significant less time to achieve the same productivity as a HPLC. As a result, TMB is an extremely efficient separation process.

Although SMB is not a perfect realization of TMB, SMB still delivers more benefits compare to a traditional batch chromatography. 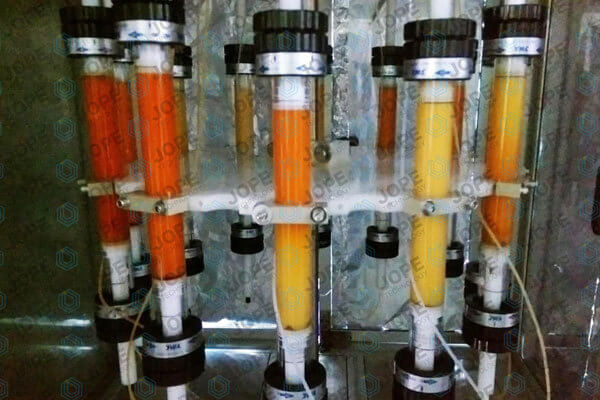 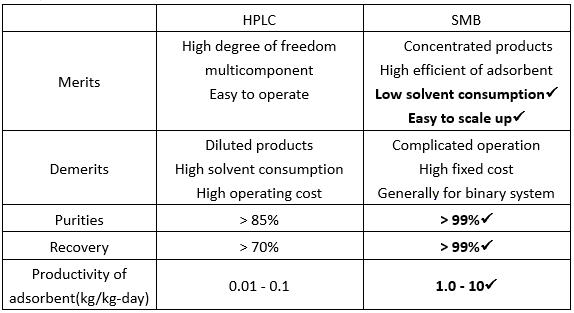 A typical batch chromatography can process and separate a variety of components if sufficient column volume and time are given. However, this usually requires intensive labor and sizable space to work. On the other hand, SMB is a highly efficient process that takes less time and space to achieve the same outcome with an even higher purity. In a SMB, all the columns and solvent are being efficiently used therefore reduce the processing cost dramatically by 90% to offer a comparable profits with batch chromatography.

*In Jope, our SMB offers unique features and comes with a price that is compatitive with batch chromatography.

Supercritical fluid is a status where the substance maintains properties between liquid and gas by passing its critical point of temperature and pressure.

Carbon dioxide is one of the most commonly used supercritical fluid. It is cheap and commercially accessible, chemically inert, non-toxic, non-flammable, and is easy to achieve its supercritical status. By working under supercritical carbon dioxide's low pressure and low temperature (31.1℃, 73.8MPa), the mild operating environment prevents the subject from structurally damaged. In addition to that, carbon dioxide has no distinctive smell, taste, or color and is easy to be fully recycled to prevent leaving residue, making it particularly ideal for the use in food and pharmaceutical industries.

Jope is the world’s first to design and build a production scale SF-SMB that can be operated up to 20 MPa pressure. By working under this condition, SF-SMB allows the usage of finer adsorbent for higher productivity. In addition to that, supercritical carbon dioxide can be fully recycled and used again in the system to reduce solvent cost. As SMB naturally delivers high yield and high purity, combining the advantages of SMB with the usage of supercritical carbon dioxide generates great benefits together in a single SF-SMB. SF-SMB will for sure make a remarkable impact to the leading green industry trend.

*All of our high pressure SMB units can be designed to include supercritical fluid technology. Make sure to check our Products and their specifications.